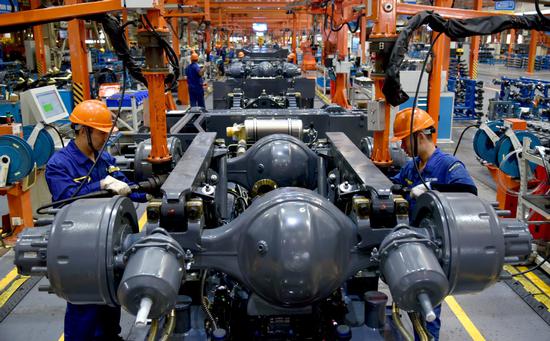 China's new "dual-circulation" development pattern marks a major move for development for the coming years and is expected to be enshrined into the framework of the upcoming 14th Five-Year Plan (2021-25), said economists and experts.

Zhang Yansheng, chief researcher at the China Center for International Economic Exchanges, said the idea of dual-circulation development will become a pivot of the 14th Five-Year Plan, highlighting China's new solution to coordinating domestic development and further opening-up in the new era.

The new development pattern, which looks at the domestic market as the country's economic mainstay with domestic and foreign markets complementing each other, reflects a major change in China's economic policymaking, Zhang said.

The pattern is seen as a key direction for policymakers in hammering out the economic blueprint for the next five years.

Proposals for the 14th Five-Year Plan are being discussed at the Fifth Plenary Session of the 19th Communist Party of China Central Committee, which began in Beijing on Monday and concludes on Thursday. The meeting is also scheduled to unveil the country's development targets in the coming years until 2035.

Zhang said the next period marks the first five years on the country's journey toward building a modern socialist country by 2049, and the development pattern will help China build a complete domestic supply and demand system and meet people's growing need for a better life.

"Domestically, China will focus on meeting people's needs as well as boosting technological innovation to create new engines of growth," Zhang said. "On the external side, China will continue to expand opening-up and build an open economic system at higher levels. Under the new development pattern, China will open its doors wider to the outside world instead of simply seeking self-sufficient domestic development."

Wang Changlin, president of the Academy of Macroeconomic Research of the National Development and Reform Commission, said China's new economic initiative is not intended to seek seclusion under the domestic circulation model, as it emphasizes the opening of the economy.

"The Chinese economy has posted a stronger-than-expected rebound despite facing a grim and complicated situation both at home and abroad amid the COVID-19 pandemic, showing its great resilience, strong vitality and large amount of room for maneuver."

China's GDP expanded 0.7 percent year-on-year in the first three quarters, turning positive after the negative 1.6 percent in the first half, according to the National Bureau of Statistics.

"The Chinese economy is playing a key role in supporting global economic stability," Wang added. "China will continue to build an open economy and share its development opportunities with the world."

"We will further open our minds to attract global talent and create an innovation ecosystem that integrates businesses, universities and research institutes, striving to become a key node connecting both domestic and international networks," Ma said.

Clarke Murphy, CEO of global executive search and assessment firm Russell Reynolds Associates, said the company sees enormous potential for the Chinese market given the considerable progress the country has made in preventing and controlling the coronavirus pandemic.

"I think this interest in learning new ways to do things has really invigorated Chinese executives and Chinese companies, as well as non-Chinese companies investing in China," said Murphy. "The fact that China would create more markets, more industry segments for foreign investment will be encouraging to global investors."

Murphy said the company has great confidence in the Chinese market over the next several years.

"The speed and scale with which China can try new technologies and new processes and learn from that scale to adapt how its companies run is rather incredible," he added. "We will continue to develop our teams of people focused on domestic Chinese companies."