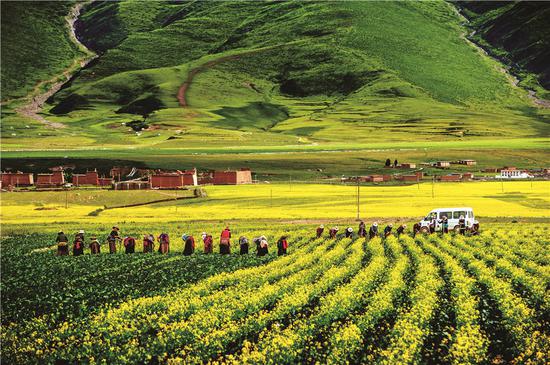 Villagers work in the fields in Aba Tibetan and Qiang autonomous prefecture in Sichuan province on July 16, 2016. (Photo by Zhao Yuanping/For China Daily)

Rural earnings have been rising steadily in China, and the wealth gap between rural and urban residents is narrowing, Liu Huanxin, vice-minister of agriculture and rural affairs, said on Tuesday.

In the first three quarters of this year, the disposable income for rural residents averaged 12,297 yuan ($1,835), a 1.6 percent increase over the previous year after adjustment for inflation, according to Liu.

"The growth rate for the quarter is expected to continue to rise, and rural people will get a stronger sense of gain and happiness as we are nearing the goal of building a moderately prosperous society," he said at a news conference held by the State Council Information Office.

In 2008, the central government first put forward the goal of doubling rural income from 2010 to 2020. By the end of last year, the annual disposable income for rural residents exceeded 16,000 yuan, marking the completion of the goal a year ahead of the schedule.

"The growth rate of rural earnings has been higher than that of urban incomes for 10 straight years," Liu added.

In addition to increased income, rural people in China have had access to cleaner living environments and improved infrastructure in the past five years, according to officials.

Wu Hongyao, a senior official with the Ministry of Agriculture and Rural Affairs, said over 65 percent of villages in China are equipped with standard toilets, and over 30 million rural households have seen their toilets upgraded since 2018.

In the meantime, more than 90 percent of villages can dispose of their domestic garbage through a uniform collection system. Nearly all of the 24,000 substandard garbage dumps detected through a nationwide inspection have been rectified, he added.

In terms of advancing the development of modern agriculture, Liu said, the central government invested a total of 8.64 trillion yuan from 2016 to September 2020 into fixed assets in the farming, forestry, animal husbandry and fishing industries.

To offset the impact of the COVID-19 epidemic, the ministry also urged local governments to increase the scale of special bonds invested in rural areas, according to Liu.

"From January to September, a sum of 120 billion yuan in special government bonds was issued, effectively broadening avenues for rural financing," he added.

As the country is now drafting the development plan for rural areas in the next five years, Liu said, a slew of fundamental, sustainable and strategic agriculture projects will be initiated.

He added that the plan will focus on the modern seed industry, storage, cold-chain and logistic facilities, animal disease prevention and control, as well as the use of new information technologies to boost development of rural areas.